Diverse backdrops you might see on the silver screen.

Oklahoma is brimming with adventure and new opportunities, and major filmmakers have been taking note. Oklahoma City ranked No. 13 on MovieMaker’s list of Best Places to Live and Work as a Moviemaker in 2022, beating out the likes of Miami, San Francisco and Dallas.

From bright lights and luxury destinations to its outdoor parks and historic landmarks, Oklahoma City is a multifaceted location for a wide range of backdrops, many located right here on Adventure Road. It’s no wonder Martin Scorsese brought his crew here for Killers of the Flower Moon or Dennis Quaid for the upcoming biographical drama Reagan, among many others, with more to come. Take a look at our top picks for standout film-worthy locations in OKC, and keep a look out for them on the big screen! 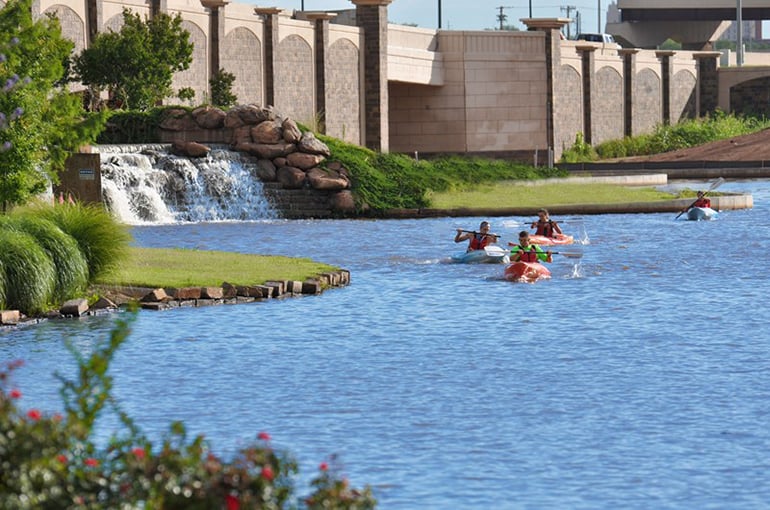 As a destination for outdoor adventure, OKC’s Boathouse District offers a riverside view of kayaking, tubing, whitewater rafting and more with endless possibilities for shooting on-the-water fun. The district also boasts numerous boathouses, a bike park, zipline, extreme jumping and youth zones and the Basecamp Nature Center. Just wait until you see the city skyline reflecting off the Oklahoma River after sunset! 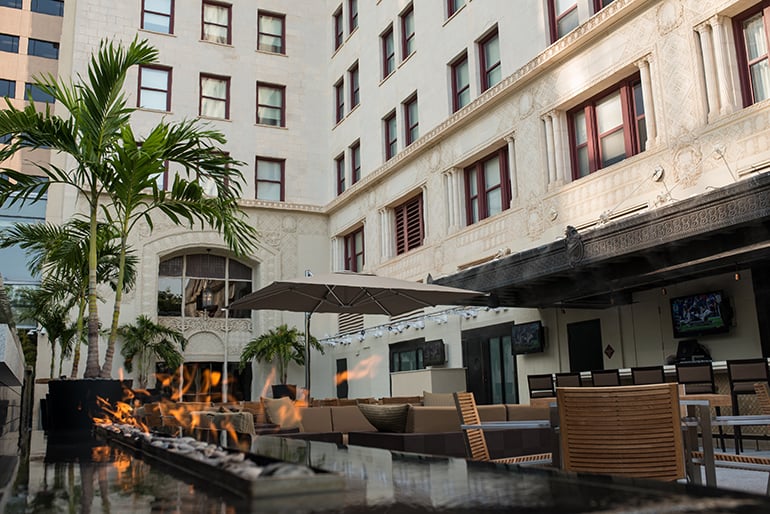 The historic Colcord Hotel was the first skyscraper on the Oklahoma City skyline. Completed in 1910 and listed on the National Register of Historic Places in 1976, the Colcord is now a luxury hotel filled with historical charm and classically chic accommodations. From its marble-laden interior and elegantly furbished rooms and event space to its upscale in-house restaurant and lounge, the Colcord is a little slice of camera-friendly heaven. 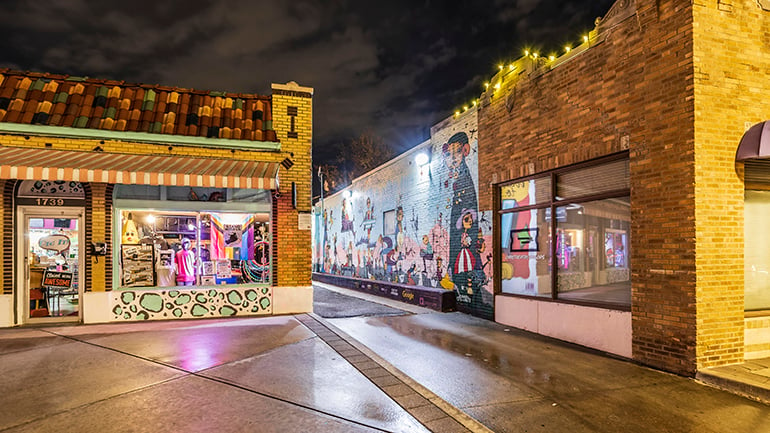 As a popular spot for locals and out-of-towners alike, the Plaza District hosts a wide range of shops, boutiques, restaurants and bars. The colorful district is draped in neon lights and colorful murals that pop each day and night. Most recently the film Second Chances found its home in the Plaza’s beloved thrift shop Bad Granny’s Bazaar and has gone on to win awards for Best Feature Film (BIFA), Best U.S. Feature Film (CIFF) and Best Actress (Allyson Cristofaro, CIFF). 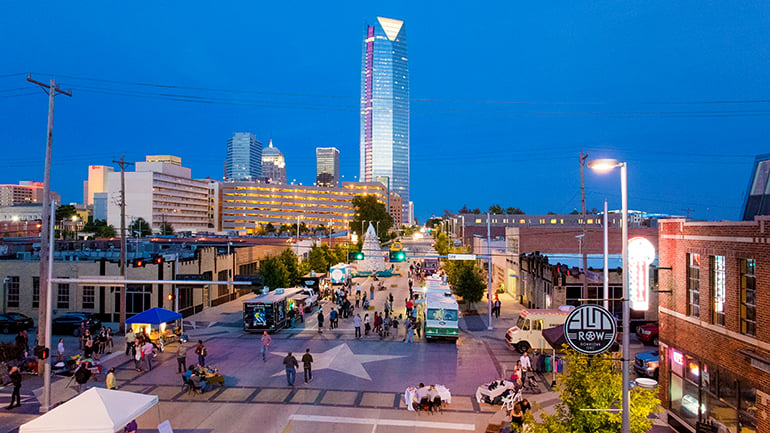 OKC’s historic Film Row was a hotbed of cinematic happenings in the 1930s with film exchanges from Hollywood studios like Warner Brothers, Paramount and MGM calling the area home. That same creative spirit can still be felt walking the streets of this thriving center for artistry, design and local entrepreneurship. Here you’re sure to find live music and entertainment, art galleries and lively bars and restaurants. 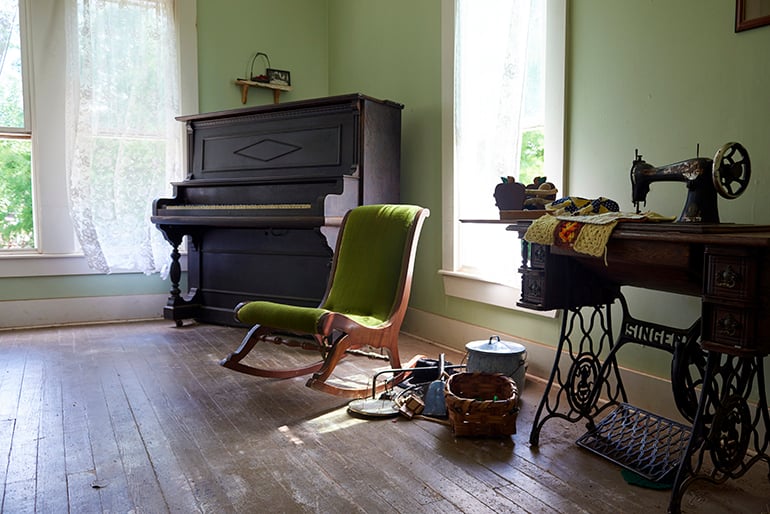 Set in a time before statehood, Harn Homestead is a 10-acre historical homestead turned museum with roots spanning back over 100 years. There are seven buildings occupying its grounds, including a one-room schoolhouse, the first two-story home built in Oklahoma and a 1904 Victorian home where the property owners once lived. Filmmakers working on projects set in the late 1800s will be delighted with the preservation of the property and opportunities for filming. It’s also a fantastic setting for Lyric Theatre’s annual A Christmas Carol immersive production. 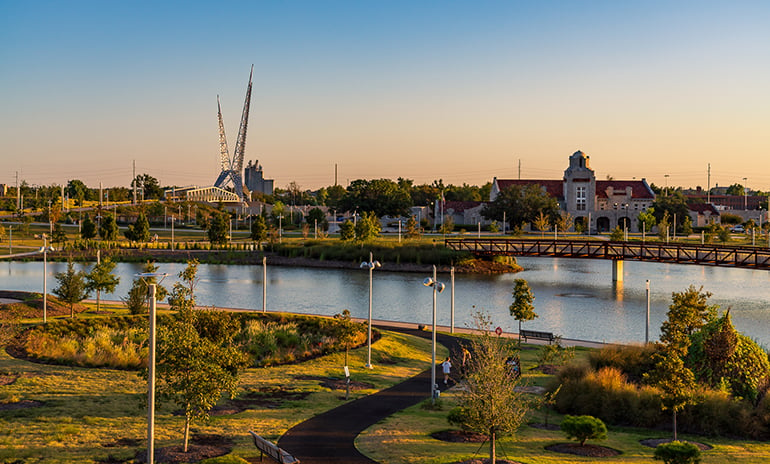 Filmmakers are sure to find some perfect shots at this 70-acre urban oasis. Scissortail Park is filled with tranquil gardens of plants native to Oklahoma, a boathouse, 5,000-square-foot skating rink, play pavilion and the Great Lawn, which hosted 28,000 people at its inaugural concert with music by Kings of Leon in 2019. Just wait until you catch a beautiful Oklahoma sunrise or sunset cast warm colors on downtown Oklahoma City. 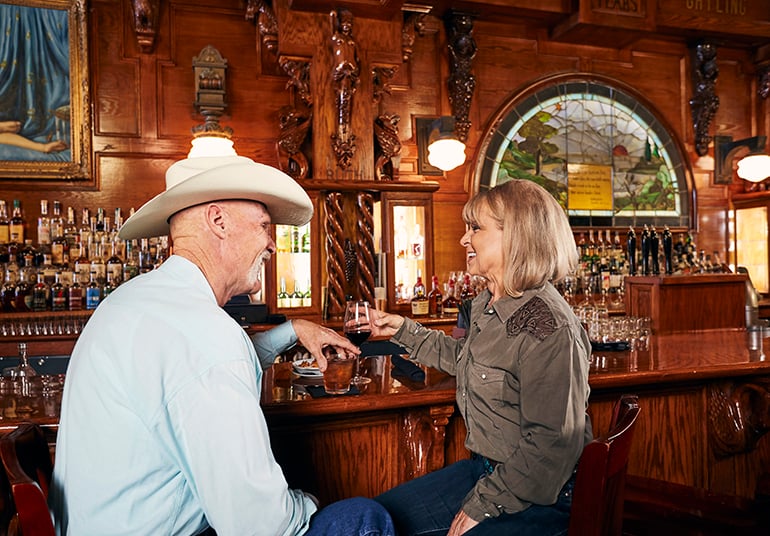 Driving into Stockyards City is almost like entering a completely different world. For over 100 years, the area has welcomed hardworking ranch hands, presidents and some of the biggest names in country music. McClintock Saloon & Chop House brings serious Old West nostalgia to every dining experience with an interior straight out of your favorite classic western film. This is a place to get a taste of the Wild West, and maybe three fingers of whiskey while you’re at it. 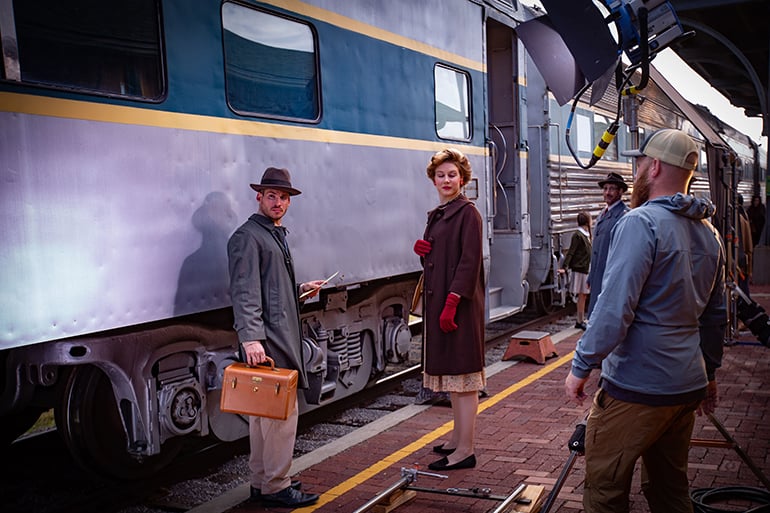 Established in 1970 by a group of railroad enthusiasts interested in modeling, photography, historic preservation and riding trains, the Oklahoma Railway Museum is both an operational railway and repository for artifacts, equipment and passenger cars and engines dating from the 1920s to the 1950s. Many have used the location to film period pieces with historical integrity intact, and most come to enjoy a ride and browse the free museum!

What do you think of our film-worthy destinations? Where else on Adventure Road could you see on the big screen? Let us know in the comments below.

What Oklahoma locations could you see on the big screen?

END_OF_DOCUMENT_TOKEN_TO_BE_REPLACED

9 Museums to Visit This Summer

Our top must-sees before September! Oklahoma’s diverse museums and art galleries allow visitors a chance to escape into ...

END_OF_DOCUMENT_TOKEN_TO_BE_REPLACED

Local Workshops and Classes to Try This Spring

Feeling inspired? There are opportunities to pick up new skills popping up all over Oklahoma this spring. If you’ve been...